The Poplar Lake launch party was held on Wednesday, October 17, at the Pilot Tavern in Toronto. There was a full and enthusiastic house, and I was very pleased to bask in the energy and support of so many wonderful friends.  I have posted photos from the event on my blog on this link.

Poplar Lake is now available in book stores (ask for it if it’s not on-shelf) and online from Amazon and Indigo. See it’s publisher page here.  Terry Fallis, two-time winner of Canada’s Stephen Leacock Medal for Humour, has said of it, “In Poplar Lake, Ron Thompson has written a captivating story, rich with humour and heart. I didn’t want it to end.”

I’m happy to announce that blues artists Robert Davis and Fraser Melvin will perform at the Poplar Lake launch party on Wednesday, October 17 at the Pilot Tavern in Toronto. Robert and Fraser are fixtures in the city’s blues scene.  They’ve recently collaborated on Robert’s Cuban Blues CD which is slated for release in November.

Robert and Fraser are fantastic musicians and I’m honoured they’ve agreed to grace the evening.  If you would like to attend, you are most welcome. The space is filling so reserve a spot – message me on my Facebook Author Page with your email and I will send you a direct Evite.

Poplar Lake is a stand-alone prequel to my 2015 novel, A Person of Letters.  Terry Fallis, two-time winner of Canada’s Stephen Leacock Medal for Humour, has said of it, “In Poplar Lake, Ron Thompson has written a captivating story, rich with humour and heart. I didn’t want it to end.”

The Poplar Lake launch party is set for Wednesday, October 17 at Yorkville’s venerable Pilot Tavern in Toronto.  Venue and event details as follows:

If you would like to attend, you are most welcome. Please message me on my Facebook Author Page with your email and I will send you a direct Evite. Space is limited so please act now!

Poplar Lake is a stand-alone prequel to my 2015 novel, A Person of Letters.  Terry Fallis, two-time winner of Canada’s Stephen Leacock Medal for Humour, has said of it, “In Poplar Lake, Ron Thompson has written a captivating story, rich with humour and heart. I didn’t want it to end.” 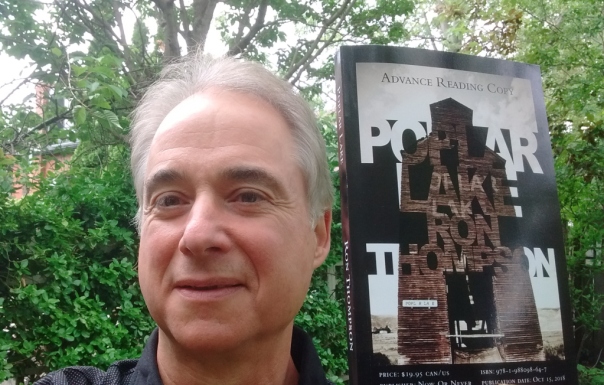 This week I received an advance reading copy of Poplar Lake from my publisher NON. Very nice to have the physical specimen in my hands after so many rounds of electronic manuscripts. NON is distributing these advance copies to various media and potential reviewers. Small presses and obscure authors (let’s be frank

) have a difficult time getting reviews – there are fewer and fewer newspapers, and those that remain have dramatically cut back their book sections – but I remain hopeful.

Poplar Lake will be released on October 15.

The Hundredth Meridian, as any fan of the Tragically Hip knows, is where the Great Plains begin, and this week APOL began its tour there as it crossed into the mixed-grass prairie west of the Mississippi River. The area is known to history as the Missouri Territory; more recently it has been disparaged as “fly-over country”; but APOL will have none of that. Seven states, ranging from the Dakotas in the north to Texas in the south, straddle the Hundredth Meridian, and they have a combined population of 38 million. That’s a lot of potential readers. What’s more, in a region where you can sit on your porch and watch your dog run away for three days, they’re easy to spot.

The Missouri Territory performs a cameo in Poplar Lake, APOL’s sequel, which will be released in fall 2018.

Note: “APOL” is the anthropomorphic version of my satirical novel A Person of Letters, which has gone on tour without me (with a wink and a nod to magical realism). Follow APOL’s quixotic world tour here or on my Facebook Author Page, and read about all of APOL’s (mis)adventures in sequence on this tour archive.  For information about the book, go to Martin Scribler Media.

On Thursday March 24 I had the honour to address the monthly meeting of the Ottawa Women’s Canadian Club at the Fairmont Chateau Laurier in Ottawa. The club was founded in 1910 and over the century of its existence it has been addressed by prime ministers, governors-general, justices of the Supreme Court, and many other accomplished and notable visitors, including the Shah of Iran. So it was with some trepidation that I prepared my speech, the theme for which was “Becoming a Writer: My Long and Winding Journey,” and stood to deliver it.

It was a winding journey for everyone in Ottawa that day, as the city was hit by a late winter storm, but we had a large turnout for the event. The audience was welcoming, kind, and receptive, and I enjoyed interacting with them in the Q&A session following the speech. At the conclusion of the discussion, the club graciously presented me with a copy of the history of the OWCC, which I will cherish, and made a generous contribution to Wounded Warriors of Canada on my behalf.

Many thanks to the OWCC, especially to Program Chair Ann Blair, President Elaine Hickey, board members Connie Gowling and Mary Townson, and everyone else who made me welcome, even staffing the book table and selling books. I was very pleased that my friends Lorna Clark and Brenda Fawcett were able to attend the event, particularly given the weather.

Later that day, I had a fantastic meeting with a local book club, facilitated by member Cathy Wiley. Thanks to Cathy and to all the members who braved the snow and contributed to an enjoyable discussion on A Person of Letters. It warms the cockles of this author’s heart to meet such avid readers and to discuss their impressions of the book and their take on the characters who sprung from his imagination.

Photos by Ottawa Womens Canadian Club, with the exception of the Chateau Laurier photo by StupendousMan 2008  (Own work, Creative Commons CC BY 3.0).

A Person of Letters has launched its own book tour – inexplicably, without its author. I’ve recently received reports of sightings and photos of the book in various salubrious locations around the world. In this picture, for example, APOL is seen lounging poolside in California, happily unrecognized by the paparazzi pack. Reports indicate APOL is enjoying the tour, meeting interesting people, seeing the sights, and hamming it up shamelessly. (I’m not bitter at all. Really.)

Over the coming days I’ll post additional photos of its travels and adventures. If you spot APOL somewhere, please let me know and send me a shot. I will post those I receive here and on my Facebook Author Page.